The study aims to identify the main driving force of Taiwan’s exports and also to analyze the structure change of its export growth. Drawing on the dataset of Taiwan’s exports with top 30 trade partners over the period of 2002-2012, the study hires a stochastic frontier gravity model in consideration of the possible barriers of “behind the border”. From the empirical evidence, the structural change in Taiwan’s exports across its main trade partners can be driven by three key factors, including the expanding in the economic scale, the shifting in the trade frontiers, and the improvement in trade efficiency. Over the last decade, Taiwan’s export growth heavily relied on the expanding in the economic scales of Taiwan and its trade partners, rather than the shifting trade frontiers and the improvement in trade efficiency. In terms of trade efficiency, the declines in the trade efficiency of Taiwan's exports may be caused by the “behind the border” measures adopted by its trade partners, especially the U.S. and China. Finally, the study also confirms the significance of both the trade creation effect and the diversion effect derived from regional integrations in shifting Taiwan’s export frontier with its trade partners. The shrinking of Taiwan’s trade frontiers is mainly caused by the trade diversion effects, led by the expanding of its trade partners’ FTA networks without Taiwan. That is, Taiwan has faced the potential threat of economic marginalization resulted from its absence from various regional integrations after it successfully pursued a membership of the WTO in 2002. 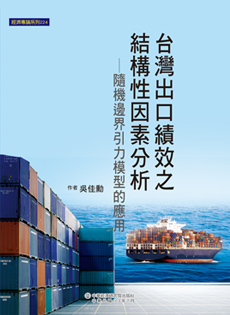