ABSTRACT PARTⅡ：Central Asia and Caucasus This book is a sequel to part one of CIER-sponsored research project on China’s Energy Security and Development of Cross-Border Oil and Natural Gas Pipelines. Three subspaces －North-East Asia, Central Asia and Caucasus, the Indian Subcontinent and Middle East－are introduced under an unifying thematic umbrella for region-based inquiry directed towards the following: to identify and trace the chains of causation which give rise to a particular configuration of the pipelines in the subspace concerned, to assess in light of the sequencing and outcome of the multiparty game its manifold implications, and to show which strategy optimizes the national interests of China relative to other key players. The present edition takes Central Asia and Caucasus as the grand chess board in which energy- as well as geostrategy of the “four poles”－China, Russia, the United States, and the European Union -– are tied and played out throughout the post-Soviet period. Revival of Chinese influence in the region is of course not new. On the upstream supply chain of fossil fuels, land-locked Kazakhstan, Turkmenistan and Uzbekistan are desperate to break isolation and to diversify export outlets for their new-found mineral wealth. The “twin game”－geopolitics and energy－is waged between the four poles and their Central Asian counterparts (attended by peripheral pipelines transit states en route), both jointly and separately. It is shown that (a) the layout of pipelines are determined by centrifugal but unequal forces beyond the Caspian basin; (b) quadric-polarity akin to oligopoly market behaviour surfaces given that Moscow is driving a hard bargain seeking to retain its traditional sphere of influence; (c) physically detached Washington is unable to exercise hegemonic power as it does easily elsewhere vis-à-vis Beijing and Moscow despite its military presence in the region; (d) the politically vulnerable Central Asian states try to balance off major powers against each other in order to safeguard broad interests of their own; and (e) China’s strategic gains are assured for the time being in both energy and broad-based regional cooperation at state level more than at private business levels. All considered, energy transport along the old Silk Road is far more complicated than NEA in hosting the type of research envisaged as making it infeasible seeking to formalize the structure of the game as it unfolds overtime. The materials presented in the present volume feature also issues of Sino-Soviet border demarcation and how they are settled. Key Words: pipeline game, Caspian Sea, geostrategy, CNPC 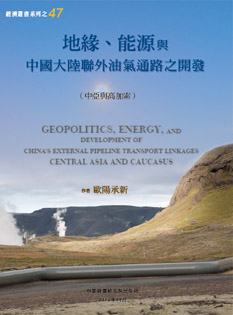